Chinese miners had been living in the nearby official camp at “The 3 Mile” since 1857. It was also known that some Chinese were living and working on district farms during the same period. In 1858 goldmining in Murmungee took off and there was a mini rush to the area. The 1864 Mining Register for the Beechworth District listed 60 Chinese gold mining at “Chinaman’s Flat”. The name of the road appears to come into use at that time. The Chinese made up >50% of miners in the district and 50 Chinese were receiving their mail at the Murmungee PO. A large organized group named “Ah Gee and Company” was working a claim at the nearby 6 Mile. The Chinese were usually organized into large groups who worked together which made them far more efficient than the typical European alluvial gold miners.

Miners on the Ovens goldfield initially used pans and cradles to wash gold from creek beds. However the nature of alluvial deposits meant that ground sluicing was adopted as the primary method of recovering gold. Ground sluices diverted water through channels or races and over a working face to loosen and wash away the soil and clay as the photo shows. The dislodged material was shovelled into a sluice-box with riffles or blocks on the base, behind which the heavier particles of gold were trapped. The Chinese miners are taking the material to be “washed”. 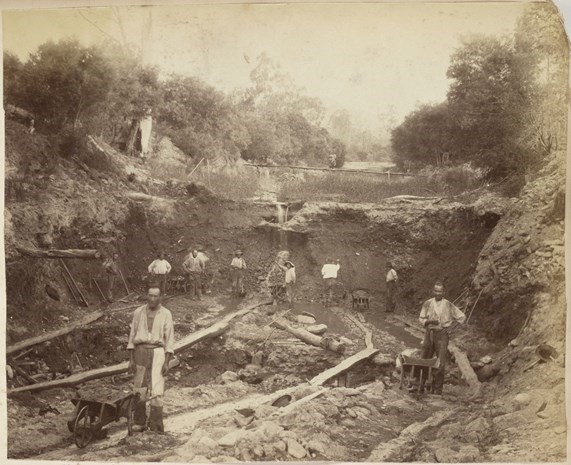 Needless to say goldmining led to major scars on mining landscapes and there were no requirements to rehabilitate the damage. The diggings and the disposal of the by-product - sludge – led to numerous disputes between farmers and the miners. The Basin had several major sludge channels draining mines on its eastern side.  It is not known where the photo was taken but it is remarkably similar to the area along the drainage line leading to Chinaman’s flat from the Buckland Gap, leaving a large U-shaped valley along Lee Morrison Road. It is quite possible the “sludge” filled in evidence of their diggings here at the “Flat”.

As the gold seams were exhausted in Murmungee Hills miners dug shafts at locations in the Basin hoping to strike “leads” of alluvial gold in buried streambeds. Obviously the topography of the surrounding hills suggest there were numerous potential sites throughout the Basin. There were at least 3 teams of Chinese miners living and working “leads” near here in as late as 1904.