In 1824 explorers Hume and Hovell were tasked to cross the unknown expanse of territory from “the settled districts” in NSW to Western Port Bay. After some weeks of struggling through the rugged hills in the north they descended the Basin escapement on 24 November. Following the banks of the Burgoigee Creek they crossed the Ovens River a short distance to the south. They were the first white men to do so and were impressed with the agricultural potential of the country. Hovell wrote in his field book that, ““The land adjoining [the Ovens] is exceedingly good and is without the scrubs, lagoons, and swamps, to which the last three [rivers they crossed] are subject. The timber which grows on its banks is thin but of good quality. The land could be cleared at very little expense. There are fine hills and grass lands in the back. In my opinion, it is as pretty a spot and as valuable as any I have seen since leaving home. But we cannot judge to what extent it runs as the bush is on fire around us.”  Of course the local aborigines were “mosaic” burning the country to maintain it for future hunting.

Their report led William Bowman from NSW to occupy the 1st permanent squatter’s “run” here in N.E. Victoria in 1838. Despite opposition by local aborigines for several years “Bowmans Forest” was part of a prized grazing run “Tarrawingee” until opened for agricultural land selection in 1857. Several of the early selectors (Kneebone, Kibell, Culhane, Louden and Jardine) built their homes along the creek near here while establishing agricultural enterprises. Due to the gold rush in the Buckland Valley there were many miners travelling along the “Ovens Track”. Shannon’s hotel/store was established on the opposite side of the track and a Toll bridge was installed here. The Murmungee Basin could only be easily accessed by 3 entry points but people still tried to evade the toll here by crossing the creek elsewhere. The Tolls were probably collected by the hotel licensee and were to finance road improvements crossing the Basin. However the road was often impassable due to the swamps and boggy ground between “One Tree Hill” to the south and “The Big Hill” to the north.

Interestingly on the occasion of the centenary celebration of the Hume and Hovell crossing 2 Cairns were constructed to commemorate the event. However both were deliberately placed on incorrect positions that the travelling public could see them. One near the junction of the Buckland Gap Road and Ellens Lane which was the main road traffic route to and from Beechworth. The other cairn is just off the Great Alpine Road near the old Brookfield railway station. People could see it when the train slowed to navigate the curve in the track. 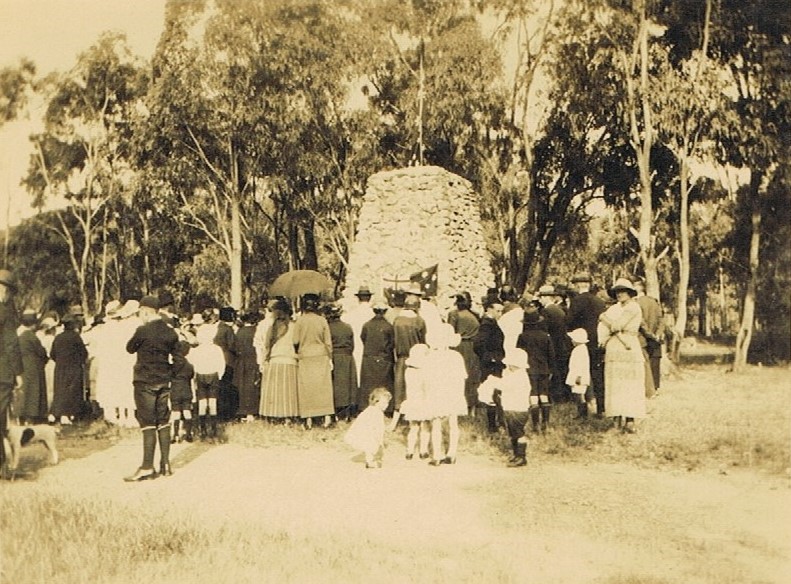