Due to geography of the surrounding hills Taylor’s Gap has always been the easiest and quickest point to and from Wangaratta, Beechworth and the Upper Ovens Valley during the gold rushes. 1000’s of miners passed through it to seek their fortune and their presence prompted the development of farming in the Basin to supply them. It marks the south-eastern end of the Murmungee Basin and the site of one of the 3 toll gates for entry to it. These were established to levy funds for road and bridge maintenance. The fee for a saddle horse to pass was 3 pence.

Originally the name was “Bryant’s Gap” – a corrupted spelling of a “Mrs. O’Brien” who ran an “Accommodation House” on the opposite side of the old track just before the Gap. It is possible it was just a boarding house but could have provided other “amenities” for the passing miners. 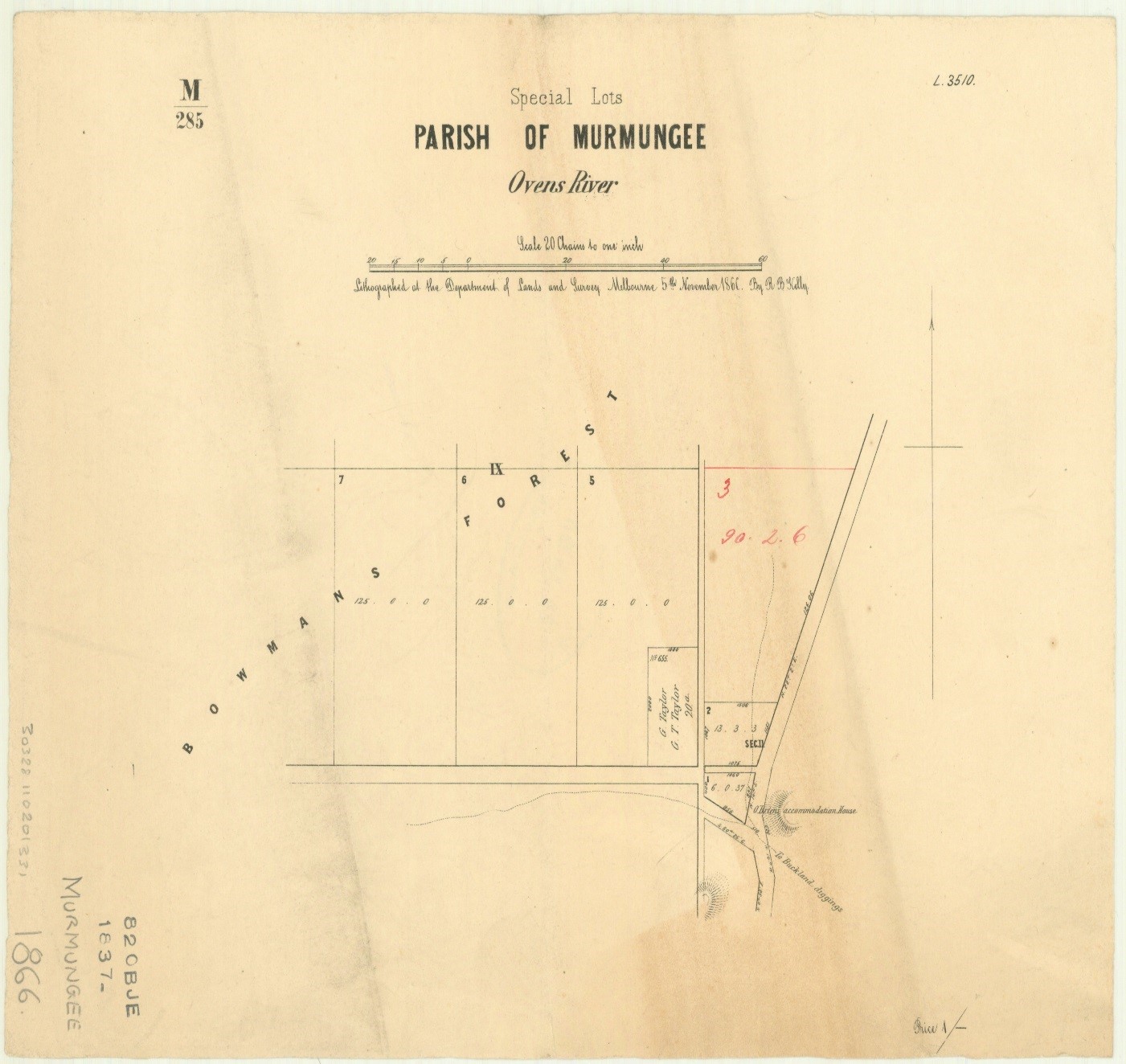 The common name for the Gap was adopted after one of the 1st Bowmans Forest land selectors - George Taylor – established a hotel opposite Mrs. O’Brien in 1858. George was a pushy character and was the determined to be the 1st selector in Bowmans Forest by altering the Basin’s 1st survey map (1857) showing his preferred selection (which he was eventually granted). He also had at least one run-in with the law implicated with dealing with stolen property. This hotel continued trading (under different owners) until destroyed by a suspicious fire in 1890.

The Gap saw many travellers ebb and flow across it over the years. During the Buckland Riot in 1857 Chinese in their hundreds retreated back to the safety of Beechworth, many staying in the Basin to mine the buried leads of alluvial gold or work on farms. Crawford & Connelly stagecoaches changed their horses here so they would be fresh for the steep climb up the Buckland Gap to Beechworth. The Kelly Gang was known to pass through on their way to Greta retreating from Stringybark Creek. They undoubtedly wouldn’t have been the only bushrangers to do so. It had thriving gold fields nearby in the Paddy’s Gully and German Gully, with a sizable settlement at German Gully up until the 1900’s. When the railroad came in 1883 Taylors Gap was well known to the crews as a dangerous place since it was the steepest section on the poorly maintained track between Wangaratta and Bright. Steam locomotives’ braking in this section resulted in many fires over the years. Once the Ovens Highway (the Great Alpine Road) was paved a very narrow overhead bridge (since removed) spanned the tracks which was a major traffic hazard. If Taylors Gap only had a voice - the stories it could tell. Now it is a pleasant stopover on the Murray to the Mountains Rail Trail for cyclists to pause, admire the views and catch their breath.